A Case for Transperineal Biopsies 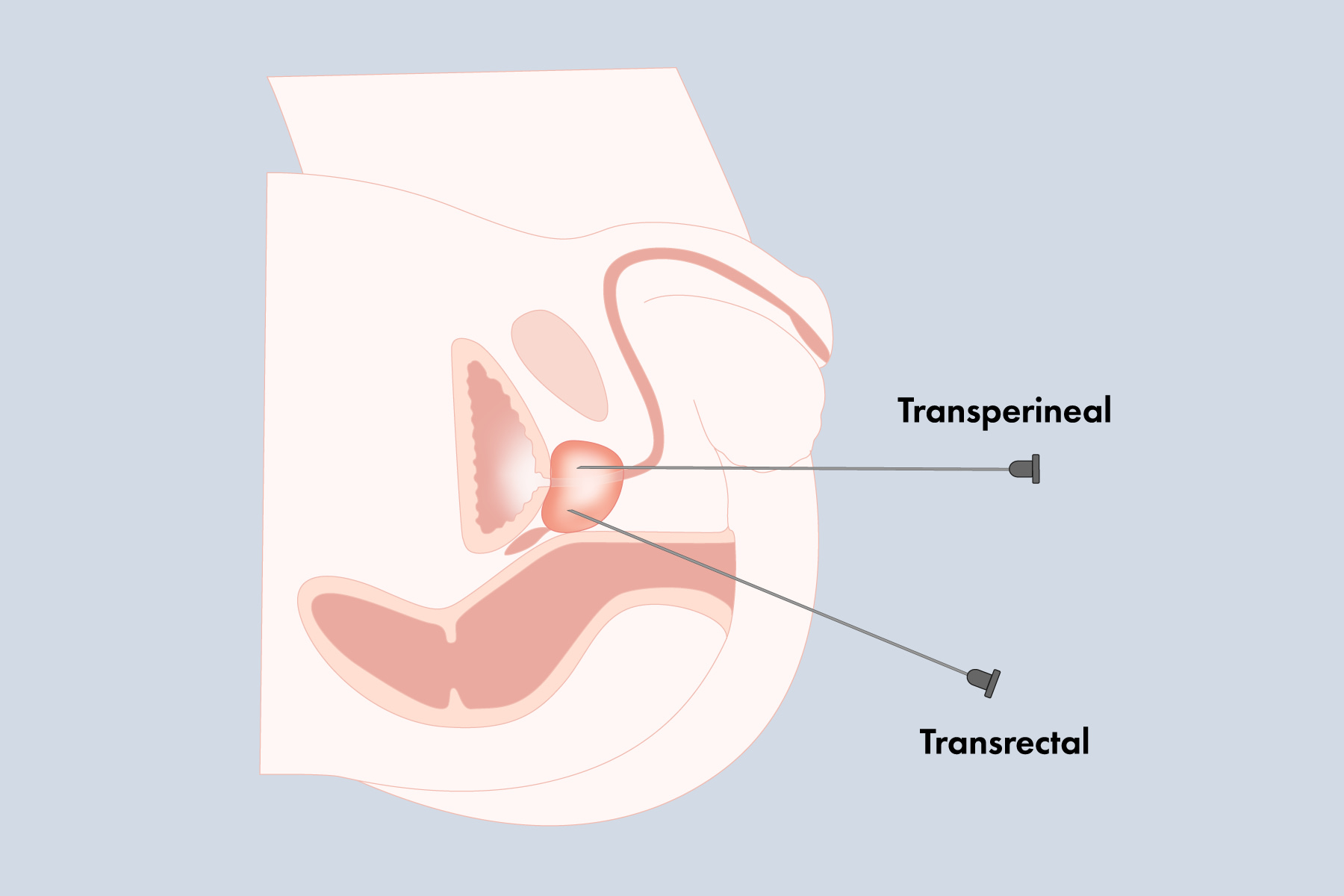 Although prostate cancer is the most commonly diagnosed cancer in men, the optimal method for diagnosis remains unclear. Favoured for its convenience and low cost, the systematic transrectal ultrasound guided biopsy is currently considered the gold standard for detecting prostate cancer, despite its high false negative rate and potential for infectious complications.1 The use of MRI improves the accuracy of detecting clinically significant cancer, prevents unnecessary biopsies, and uses fewer cores, but there is still concern for infection.2 Because transrectal biopsies pass the needle through the rectum, each pass poses a risk of introducing rectal flora into the prostate and/or urethra. To mitigate the risk of infection, an enema and prophylactics, typically fluoroquinolones, are administered prior to biopsy. Although effective, the widespread use of fluoroquinolones is threatening our ability to treat bacterial infections.1

Fluoroquinolone resistant bacteria, which is responsible for most cases of sepsis, is often greater in patients post-transrectal prophylactics than prior.3 In 2016, the FDA announced that fluoroquinolones should only be used as a last resort due to the risk of “disabling and potentially permanent side effects of the tendons, muscles, joints, nerves, and central nervous system that can occur together in the same patient”.1 As a result, transrectal biopsy prophylactics now encompass other broad spectrum antibiotics such as multi-drug prophylactics or culture-specific prophylactics. These methods may be successful, resulting in a less than 1% sepsis rate, but they directly contradict the warnings from the CDC and WHO by using more or more powerful antibiotics.1

From 1996 to 2005 the rate of readmission for sepsis post-transrectal biopsy in Canadian men rose from 0.6% to 3.6%.4 Sepsis occurs in 2%- 5% of transrectal biopsy cases6 and, if bacterial resistance is increasing, it’s safe to assume infectious complications will continue to rise, along with its financial cost.5 The length of hospitalization post-transrectal biopsy sepsis ranges from 1.1 to 14 days, with 1.1% to 25% of patients being admitted to the ICU.6 The estimated associated cost for each patient ranges from $8,672 to $19,000 USD.6 If an average of 3.25% of 1 million cases are readmitted annually, that can cost national healthcare systems up to $617 million USD. Managing this challenge, while the transrectal approach remains standard, would demand substantial healthcare and financial resources to implement strategies such as active surveillance of rectal flora or the development of new antibiotic or non-antibiotic treatments.1 Taking preventative measures could decelerate the growth of antibiotic resistant bacteria, but they do not solve the heart of the problem; passing through the rectal wall.

The Transperineal Approach- Why The Uptake Is Slow

“The rate of sepsis post-transperineal biopsy is nearly 0%, which is 40 to 70 times less than that of transrectal.”4

To tackle the rising sepsis rate, transperineal biopsies offer a clean solution by passing the needle through the perineum, rather than the rectum, thereby eliminating the need for fluoroquinolone prophylactics.1 The rate of sepsis post-transperineal biopsy is nearly 0%, which is 40 to 70 times less than that of transrectal, yet there is no significant difference in detection rates.4 Despite this major advantage, the transition to transperineal has been slow due to the perceived need for general anesthesia, specialized equipment and higher associated costs.5

“It (transperineal biopsy) is becoming widely accepted as the superior method for targeting the anterior and apical regions, even in an MRI-targeted context.”1

Modern research proves MRI-targeted transperineal biopsies can be easier to learn, more effective and less costly than previously expected.  Within 30-50 procedures, trainee urologists, with less than 1 year of experience, achieved similar times (13 min and 9 min) and detection rates (73% and 68%) to senior urologists, while performing systematic transperineal biopsies with MRI-targeted biopsies.7
In contrast to most MRI-US fusion systems, the Fusion Bx has no learning curve between the transrectal and transperineal approaches because the equipment and software interface are the same in both cases.8

The MRI-US fusion transperineal biopsy has the potential to become the new “gold standard” as it addresses both major concerns of accuracy and infection.2 It is becoming widely accepted as the superior method for targeting the anterior and apical regions, even in an MRI-targeted context.1,5,9 Sampling through the perineum also results in longer core lengths, which provides more prognostic information from the biopsy. Some studies have even shown MRI-US fusion transperineal biopsies to outperform the transrectal approach, by as much as 10%.9 Compared to transrectal biopsies, where the probe may be moved in the pitch, yaw and rotational directions, transperineal ultrasound probes are limited to rotation, which may reduce patient discomfort and overall movement.8

Another key difference is the distance the needle travels and its likelihood for deflection. In transperineal biopsies, the needle must pass through skin, subcutaneous fat, Colles’ fascia and pelvic floor muscles, rather than just the rectal wall. The average transperineal needle deflection is 6-9 mm, whereas transrectal has a general error distance of 1-3 mm.8 Few systems, like the Fusion Bx (Fig.4), even visualize the needle deflection, which allows physicians to more accurately account for it by pointing the tip of the bevel in the direction of the deviation.1

Transperineal biopsies performed under local anesthesia may be becoming more prevalent as a cost friendly option for providers, but how do the patients feel? In short, not too bad. In 2017, a study tested the tolerability of patients when administered local anesthesia and a periprostatic nerve block (PNB) prior to an MRI-targeted transperineal biopsy. Using a brachytherapy stepper and grid, a minimum of 4 cores were taken via cognitive fusion. The procedure was performed by one doctor with two assistants in an average of 27 minutes. The median visual analog scale (VAS) pain score during the biopsy was rated 1/10. 89% of patients were not dissatisfied and would recommend the procedure to others.10A couple of years later, a 2019 study challenged the efficacy of the standard periprostatic nerve block for transperineal biopsies. 20% of patients refused to undergo biopsy without anesthesia, thus making effective anesthesia an important factor for successful biopsies. The periprostatic nerve block (PNB) is considered the “gold standard” of analgesia, even outperforming oral morphine, but it cannot eliminate all discomfort. A small number of anterior and superolateral nerve fibres are unaffected by PNB, which makes apical cores, often the target of transperineal biopsies, more painful. The study proposed blocking the pelvic plexus, which is the origin for all prostatic nerves, as a superior alternative. Template guided transperineal biopsies using a brachytherapy stepping unit and grid were performed on three groups of patients. The group administered the pelvic plexus block (PPB) reported significantly lower VAS pain scores during biopsy than the other two groups, one of which was given the standard PNB. Although the PPB was the most effective, it is important to note that all groups had pain ratings under 4.6/10.11 Similar studies have shown patient VAS pain scores under 3, even when administered the typical PNB.10,11

To Sum It All Up

Despite the advances in diagnostic imaging, a systematic transrectal biopsy is the current standard of care. Widely accepted for its low upfront cost and convenience, this standard only finds cancer 20- 30% of the time.12 MRI-targeted biopsies can address the issue of accuracy, but there’s still a primary concern for the unsustainable use of fluoroquinolones with the transrectal approach. The WHO and CDC warn routine use may be accelerating the development of antibiotic resistant bacteria and threatening our ability to combat infection.1 The transperineal method is a clean alternative to transrectal as it circumvents the rectal wall and eliminates the need for prophylactics. Several studies have proven transperineal biopsies, performed in-office and under local anesthesia, are a feasible alternative in terms of cancer detection rate, procedure length and patient tolerability.5,8,10,13 Its uptake really depends on the healthcare system context as it is an unfamiliar approach for most doctors and may be inconvenient for the provider.1 Initially the procedure may be more costly, but think about the savings on sepsis readmission, fluoroquinolone use, stays in the ICU and prolonged antibiotic therapy in the community.4 Until transperineal biopsy is the new standard, transrectal biopsies should be performed using MRI-US fusion biopsy and risk factors for multidrug resistant bacteria should be taken into consideration.1

Whether taking the transrectal or transperineal approach, Focal Healthcare’s Fusion Bx is the simple MRI-targeted fusion prostate biopsy solution. The unique semi-robotic arm allows freehand-like access to the entire gland, while maintaining consistent probe pressure on the prostate to minimize prostate deformation. The hands-free counterbalance keeps the probe steady in any position, which reduces the need for additional assistance. Using buttons on the stepper, physicians can advance through the simplified 4-step guided workflow without having to take their hands off the probe.  Patient movement is typically more prevalent in biopsies, whether transrectal or transperineal, when performed under local anesthesia. Using our motion compensation feature, any movement is automatically adjusted for by maintaining MRI-US coupling, so procedures may continue uninterrupted.

As the likelihood for needle deflection increases with the distance and mass the needle must pass through, the ability to account for deviation is even more important with transperineal biopsies. Compared to other systems, the Fusion Bx software displays the live ultrasound view, in addition to the 3D model, which shows the projected needle path and core locations. By visualizing the difference between the projected and actual needle path, physicians can more accurately account for any needle deflection (Fig.4- 5).

In combination with the arm, stepper and software, physicians can seamlessly transition between either approach because the setup and workflow are the same in both cases. Using a system like the Fusion Bx not only eliminates the cost of specialized hardware and software, but also the time spent setting up or taking down the equipment for transperineal biopsies. For hospitals and clinics that reserve transperineal biopsies for a minority of cases, or are in the process of making the switch, the Fusion Bx offers the flexibility to support all of your biopsy needs. For more information download our brochure or contact us at sales@focalhealthcare.com.